7. Day three of Kitchen Mission: Airless Painter, an Epic Struggle or: You Can’t Paint Without Pain 9. Day 6, Saturday July 16, In Which I Take the Appendix out of the Cooktop 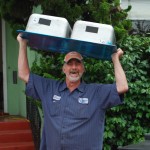 8. Kitchen Mission: I Bond with the Journeymen and the Resurrection goes on

When Friday dawned we had great hopes for a transformation, and got close. As we looked over the paint job in the morning light, we found it tolerable. I saw every flaw, Alexandra told me to quit complaining, and I complied. The BR Electric guys showed up and started talking about what needed to be done. I stuck around long enough to make sure they had the plan down, then returned the sprayer to the paint shop. 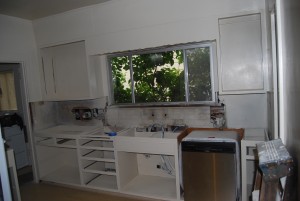 Friday Morning, ready for the bustle that would bring us strides closer to our dreamy little kitchen

As noted, the paint shop charged me for two days, which was fair, as it had been less than 48 hours. I offered to write them an instruction manual for $200 with illustrations—a very good price– but the guy just stared at me, not knowing how serious I was. Or maybe he didn’t hear me. I have that effect on people sometimes when I surprise them. Anyway, I dropped the subject, paid my tab, got my deposit check back and got the hell out of there. Before I left, I asked if they could put our color paint in a spray can. No luck. Overall, the experience at Kelly Moore wasn’t bad. The paint was consistent, quickly mixed and the sprayer, in the end, worked once you knew about the damn offset primer-to-spray knob. See my previous effort for that tale of frustration.

I returned home and set to work prepping for hardware installation. Alexandra was out running errands and watching John’s musical performance at the end of his camp. About 10, the counter guy showed up. Busy guy. 50-ish, rangy, positive. Put the counter in at high speed. The job is generally pretty good. I’ll know to prep the back wall better next time; this time, I barely had time to get the cabinets painted.

The upshot is the counter guy had to trim away part of the back lip to keep it straight making it a bit tricky to get the wall flat for tiling. I do regret not getting the pieces he cut out for the cook top and sink. Those make great work surfaces and can be cut up to get small pieces for repairs and missing trim. Error.
So there I am, Friday, two, then, later, three electricians, plus the counter guy all hustling around doing their jobs with me occasionally getting in the way. I was outside drilling holes for the drawer handles, one of the little steps that makes you feel like you’re almost done. But you’re not. Not by a long shot. 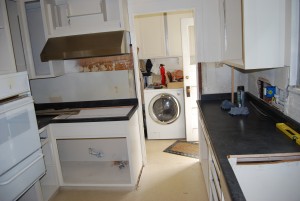 Now we're talking! This is a set up I can put my mark on. It starting to look a lot like a kitchen. We didn't even go crazy. Pretty good.

This was the first day Chris the tile guy came by to look at the place. He made two more fly-bys before he got started two weeks later. Another hyperactive journeyman, he comes in looking at everything, eyeballs the backsplash, we yammer about it for a few minutes and he says $350, it’ll take him about a day.

T’other tile guy wanted $1200, so this is definitely a better sounding deal. Chris had been recommended by our neighbors, Brad and Tiffany, who had known him for some years. I caught them over the fence a few days before and after giving me Chris’ number as we parted, Tiff yells, “he’s really good!” On the sole basis of that, I figure the job will come out okay, and it came out pretty damn good, I think. Looks great. But the tile is still a question mark at this stage and, right now, I just want to get the kitchen back on line.

It is at this point I realize we are, in the vernacular, acting as our own general contractor. Of the seven jobs, cabinetry, plumbing, gas fitting, countertop installation, electrical, tile, we’re having three done and doing four ourselves. So Friday ran along, with the counter guy doing his thing, the electricians doing theirs and me in the back yard mounting hardware. Manly. 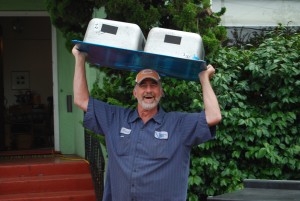 Yep, What's his name. the counter guy. Had a few hacks in the job, but it was dead level and whether by chance or plan, I was able to flex the counter up enough to just squeeze the dishwasher back in.

By about 2 p.m. the counter was in. To my unpracticed eye, it looked great. The counter guy was a nice dude, lived up near Dixon or somewhere. Asked me what I did, and when I said a writer—now more of an editor, he says, “ I took ye for a doctor, what with that fine lookin’ wife and all,” and points at an unused but loose surgical mask on the table. It ws left over from Nina’s birth and intended for use as a sanding mask. There were some trim issues, as I noted, but over all, the counter transformed the kitchen. We had a workspace, again. 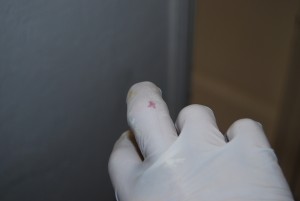 Not much of a wound, but all I had. I never even named it, it was so small.

The electricians split shortly after that. They had run all the Romex from the junction box—which they had put in two years before–to the outlets but not changed the hookups, so all the outlets still worked. We could move back into the kitchen over the weekend—if I could get the sink and cook top in. The electricians wanted to get out early because they were racing motorcycles at the track with one of the guy’s son that night. 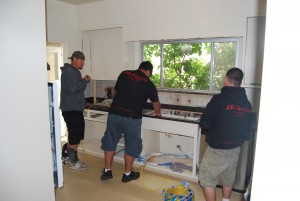 BR Electric. These guys kicked some pretty good butt. Ran into a couple odd problems after the work was done, but more about that later.

They glanced at each other when I asked if they were coming in Saturday or Monday in such a way that said that was the last thing they’d be in shape for Saturday morning. No, they would be back Monday for the final wrap up, including installing the LED cans in the kitchen ceiling and the Halogens over the sink. Man, I am a guy who loves light in my work areas and knew I was gonna love having a dazzling bright kitchen. Still, I was glad to have a clear field for the appliance installation I had scheduled for the morrow. 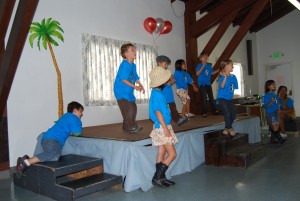 Ya wonder what he'll remember from this summer. He's played a substantial role in the remodel, and here, he plays a role of another kind. He was rehersing at home all week to CDs on his CD/Amp he got from his grandparents for Christmas. 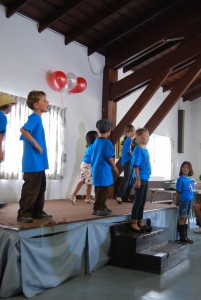 Singing his little heart out! What a guy.

Thus, though the counters were a step forward, the electrical stuff was hanging out of the wall. Under the cook top, where it would plug in, the new outlet stalk was in place, but lying on its side. The new sockets were in place under the sink for the disposal (assuming I could re-install it) and the dishwasher, both of which needed to be converted from hard wire to plug-in. I figured I’d have to do those jobs.

Alexandra brought John home about 3 and he and I fired right up and headed for Home Depot where we shopped for all the components needed to install the new two-basin Kohler sink and for a new gas connection hose for the range, as well as the replacement wire with a plug for the disposal. I had set the sink into place and measured the under-the-sink dimensions as best I could.

To figure the whole plumbing thing out, I turned to my trusty helper, the internet. I found a great YouTube video showing exactly what to do, including installing the strainers, and another showing how to re-install the disposal.

John and I found the plumbing section at HD and bought all the pieces needed, plus one or two that I might need, and headed for home. I forget where we ate that night, might have been La Mediterranee, might have been Chinese at Mama’s Soup Shop or what ever that new place on the corner of Webster and something or other is. 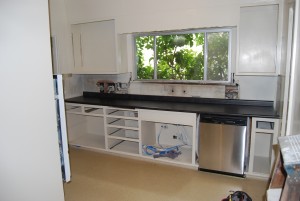 That's what I'm talking about! Hot damn! When I saw this, I got fired up to bolt in the appliances and get the hardware on the cabinetry.

When we went to bed that night it was with the potential for a 90 percent-completed kitchen to appear the next day. All I had to do was install the sink into the countertop, re-install and hook up the faucet, connect the dishwasher in- and out lines and the fridge’s icemaker waterline; re-install the disposal, plumb the sink—something I had never done before; and install the cook top without damaging it or blowing up the house when I connect to the gas. The big fear is the valve handle breaking off right after you discover there’s a serious gas leak. If you can avoid that scenario, you’re pretty much home free. I sacked out as usual at 1, determined to take back the kitchen the next day. 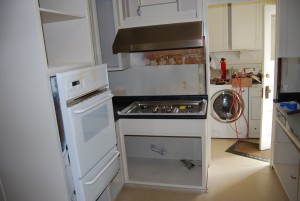 This is what it looked like just sitting there, Thursday night. Gonna look great when we get done!

2. Things really got cooking before we left for vacation

One Response to 8. Kitchen Mission: I Bond with the Journeymen and the Resurrection goes on