Aviation: past, present and future Lincoln Beachey and the Little Looper 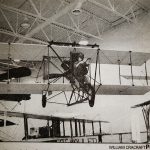 Ely paved the way for landing on ships’ decks

San Francisco has always been a Navy town, and Eugene Ely sealed the city’s reputation when he became the first aviator to land an airplane on the deck of a ship in San Francisco Bay in 1911.

It was an era of airborne exhibitions, pilots who flew to amaze crowds, take a cut of the gate and move on. As usual in the world, there were unseen forces at work, efforts to make practical use of the developing science of aviation.

The possibilities were obvious to Navy officials. The value of the aircraft as scouts was unmistakable. Aircraft would be used as war machines in the skies of Europe in a few short years. The Navy nodded its ponderous head and Curtiss moved ahead with his plans.

He went to work at four-mile­long North Island off the San Diego coast developing his naval aircraft. The result of his efforts in this isolated spot was his first successful seaplane, the Triad. By the end of 1910 construction of the Triad was imminent and Curtiss turned to the second part of his program.

In January of 1911 he sent aviator Eugene Ely, a member of the Glenn Curtiss Exhibition Flying Team, to San Francisco. Ely, who had scraped through a single takeoff from the deck of the battlecruiser USS Birmingham in Hampton Roads, Virginia, a month earlier, was the only experienced shipboard aviator in the world.

Ely prepared for his rendezvous with history by marking a mock flight deck on a field, then practicing his landings until he was sure he could hit the real flight deck where he wanted to. He found the runway too short for safe landings and, days before the test, he devised a snag wire to slow his aircraft when he landed on the ship.

Sandbags were tied to the ends of the ropes, the ropes were draped across the flight deck and Ely attached a hook to the tail of his biplane. To its credit, the Navy seemed to have caught the spirit. Ely and Captain Ponds of the test ship USS Pennsylvania split the cost for rope, the Navy donated sea bags and the men probably acquired the sand for free. This jury-rigged innovation was refined and is the standard method of slowing fixed-wing aircraft to this day.

In the preceding weeks, Glenn Curtiss had overseen the construction of the 130-foot-long flight deck on the foredeck of the battlecruiser Pennsylvania at Mare Island Shipyard. On January 18 Ely took off from Selfridge Field, located near what is now Tanforan Shopping Center, in a regular Curtiss pusher biplane and headed for the Pennsylvania.

When the plane hit the deck, the hook was supposed to snag one of a series of ropes stretched across the flight deck to slow the aircraft. The system had been devised by Ely and his brother-in­law just before the flight.

It was January, and Ely bundied himself in warm clothing, a padded helmet and, another first, wrapped an inflated bicycle tube around his chest to provide buoy­ancy should he have to ditch in the bay.

Ely came into view an hour before noon and, under the eyes of a thousand watchers, crossed the shoreline at 50 miles per hour, swung out over the water and lined up for his approach.

He cut his engine, dropped below deck level for a moment, popped up and touched down. He snagged the third rope of the primitive arresting gear and still came within 10 feet of the canvas crash barrier at the end of the flight deck.

He was in the history books again.

Ely was invited to lunch by the Pennsylvania’s Captain Pond, dined, turned his plane around and took off for San Bruno. Seven months later Ely, like so many of his brothers of the sky, died in an airplane crash.

It was 10 years before the Navy added ship-based aircraft to its arsenal, but the effective use of naval aircraft in the darkest days of World War II gave the free world time to take a breath when they stopped the advance of Japanese invasion forces at Wake Island and the Midway Atoll in the Pacific.

The event was commemorated in a ceremony 85 years later at Alameda Naval Air Station.

The U.S. Navy asked museum officials to duplicate the feat in commemoration of Ely, landing the plane on the USS Carl Vinson, a nuclear aircraft carrier, but couldn’t get the plane assembled in time, said Willie Turner of the museum. Now, Alameda Naval Air Station stands deserted, a monument to the birth of Naval aviation in San Francisco Bay.

Along with an airworthy replica of his aircraft, the helmet Ely was wearing that day rests in the Hiller Aviation Museum along with other memorabilia donated by Ely’s family.

The original compass Ely used to navigate with and his original license, Number 17, issued in 1911 by the Federation Aeronautique International, are among the artifacts.