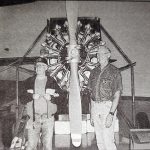 Aviation: past, present and future

On June 5, 1998 the Hiller Aviation Museum, a forum and information center for the area’s aviation business opportunities, will open its doors. The museum will rotate displays, hold special events and symposia on past and future aviation, showcase significant technology and offer hands on interfaces for visitors. Facilities will include a fully operational control tower, theater, lecture hall, instructional center, libraries, conference rooms and a repair workshop.

The museum was founded not only to display artifacts of the past, but to help usher in the next 100 years of aviation in the Bay Area and world. In addition to ground systems development, the science of flight continues to expand.

To analyze the past and future development of aviation for practical purposes the museum has established a panel of scientists, aviation experts and retired aviation executives. The findings of the group will become part of the museum’s permanent attractions.

One conclusion the group has already drawn is that the Bay Area is perfectly positioned to fulfill the technological needs of future aircraft, including those which fly automatically. The proximity of Silicon Valley provided immediate access to devel­oping technology in the fields of instrumentation, command and control, telemetering, diagnostics, communications, miniaturization and advanced software.

Other technological advantages include the high-quality academic institutions and capital formation capabilities of the Bay Area. The museum will be a western center where technical and business skills are assembled to create foundations for this new air transport era and to promote opportunities for assuming its leadership. The San Francisco Bay Area is already spotted with historically significant sites in the world of aviation. There are three international and two re­gional airports within a mile of the bay, making the area one of the largest aviation hubs in the world. Following is a list of some of the prominent achievements in aviation from the area.

In the beginning, aviators took off from whatever site was convenient. Aircraft needed much less runway than they do now, and maintenance facilities were portable. Frederick Marriott flew the first three-axis aircraft, the Hermes Avitor Jr., from a spot near Bay Meadows Racetrack in 1869. The craft went up in flames and Marriott’s dreams were shattered by the recession of 1870, but aviation progressed.

In 1883 Professor John Joseph Montgomery, soon to be associated with the University of Santa Clara, made the first successful glider flight in the United States. His testing ground was in San Jose at the current site of Evergreen Community College. He later died in an air wreck at the site.

On January 15, 1911, during the San Francisco Air Show, Lieutenant Myron C. Crissy leaned overboard and dropped a six-pound bomb from a Wright biplane flown by a civilian, Philip Parmelee. It blew a hole in the marsh three feet wide and two feet deep. Hiroshima was 34 years away. Three days later, Eugene Ely, a flyer with the Glenn Curtiss Exhibition Flying Team, took off from a spot near another racetrack in San Bruno, now Tanforan Shopping Center. Ely made the first aircraft carrier landing on a 130-foot flight deck attached to the battle cruiser USS Pennsylvania. A portion of the airfield used overlaps what is now S.F. International Airport property.

In 1913 Sam Purcell of San Jose designed and constructed the first twin-engine aircraft to be built in the United States. It flew from a base in San Rafael.

Two years later, at the Panama-American Exposition, famed aerobat Lincoln Beachey tore the wings off his aircraft at about 200 miles per hour in the “Dive of Death” near San Francisco’s Marina District. He perished in the wreck. That airstrip was bounded by the Bay, the Presidio, Marina Boulevard and Fillmore Street.

Crissy Field, named after the lieutenant who pioneered aerial bombing, was a little further west along the bay front and an integral part of the Presidio. Neither of these sites were suitable as long-term airports due to runway length and adverse winds. Sand dunes in the Ingleside District of San Francisco were also used as landing sites.

In 1916 Joseph Bocquel touched down in front of the Civic Auditorium and, in 1924, Air Corps Lieutenant Russell L Maughan made the first uninterrupted east-west crossing from New York to San Francisco. After World War I, Sam Purcell duplicated Bocquel’s feat flying a 400-horsepower Curtiss aircraft.

In November of 1926, San Francisco voters approved by a majority of almost five to one a charter amendment to develop an airport. The airport was to have 9,000-foot runways, space for 24 planes, lights, windsocks, a weather station, machine shop, fuel and maintenance facilities and fire-fighting and first aid equipment. Estimated cost was $350,000.

In March of 1927 the city took a lease on a piece of the old Mills Estate, 14 miles south of San

Francisco, a 22-minute drive in those days. The deal covered 160 acres of dry land and 1,000 acres of reclaimable swampland. Con­struction began in June, and in September five planes took off from what was called Mills Field for the Pacific Coast Air Derby in Spokane.

On October 15, 1927 a Boeing cargo plane, the first regular commercial airliner to use the field, circled over the scraped earth. One civilian flyer called the 1927 Mills Field a mud hole. Three landing strips were planned of 5,770, 2,750 and 1,850 feet.

Meanwhile, Oakland had established a municipal airport with Port Commission funds on Bay Farm Island and several groups including Boeing, switched operations to that field.

In 1935, Pan American Airways China Clipper, a Martin M-130 piloted by Captain Edwin C Musick, made the first transpacific airmail flight from San Francisco to Honolulu, Midway Island, Wake Island, Guam and Manila. By far the largest aircraft in the world, the 26-ton giants, they were designed specifically to meet the exigencies of ocean air travel. The aircraft cruised at 150 miles per hour and had a range of 3,200 miles.

On October 21, 1936, the China Clipper, the largest flying boat ever, first carried passengers across the Pacific. The Clipper’s central lounge, wider than Pullman club car and fitted with armchairs and china and silver­ware meal service, was occupied by nine passengers who paid $1,438.20 for the round trip from San Francisco to Manila.

Ernest Renzel Jr., a 1939 businessman and aviation enthusiast, coordinated the purchase of 483 acres, the future site of San Jose Airport.

During World War II the Hayward Air Terminal was developed as an Army aircraft fighter base. Post-war, the 500 plus-acre facility was declared surplus and transferred to the City of Hayward.

May of 1944, Western Airlines established service between San Francisco and Los Angeles. That same year Stan Hiller flew his first helicopter and began development of other vertical take off and landing craft.

The first formal parking lot opened in 1950 at SFIA and in 1951 California Central and Pacific Southwest airlines began operation out of the airport. In 1962 the Oakland International Airport opened. Two years later, San Mateo County purchased the 71 acres of the San Carlos Airport and began improvements.

The last 40 years have been marked by rapid and seemingly constant expansion at Bay Area airports.

In 1995 San Jose International Airport extended its runway and the FAA has built a state of the art control tower. A third terminal is being built to accommodate the 14 million passengers expected by the year 2000.

In 1996 the Oakland International Airport handled 4.5 million passengers. There are over 10,000 people working at the airport from managers to maintenance workers to administrative workers.

Ten airlines operate or will operate out of the OIA terminals, providing over 1,200 flights across the world. Terminal One, opened in 1962, recently underwent a major facelift. The three biggest employers at OIA are Federal Express, United Airlines and Southwest Airlines.

San Francisco International Airport is the Big Kahuna of San Mateo County. The airport generates $6.8 billion a year in personal income, supports 229,400 area jobs, and there are 30,200 people working there now. Currently SFIA is the fifth busiest in country and eighth in the world in terms of passenger movement. It handles 95 percent of international and 62 percent of domestic air travel in the Bay Area market.

The Pacific Rim, including China and Japan, is the fastest growing market for air transportation in the world. SFIA is fulfilling a master plan to bring the airport up to speed with the demands of the 21st Century. SFIA moved 38 million passengers in 1996 and will increase to 51 million passengers in 2006.