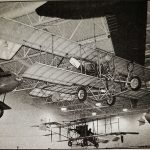 Lincoln Beachey and the Little Looper

Pullquote: “The gold medal they were going to present to him was not ready yet, so they asked him to go up one more time. That was it. He drowned in from of a quarter of a million people.” Frank Marrero, Beachey biographer

One of the most famous aviators in U.S. history was born in San Francisco. His plane, Little Looper, resides at Hiller Aviation Museum and San Francisco Mayor Willie Brown dedicated a plaque to Beachey this year, near the site of his death at the San Francisco Marina.

Lincoln Beachey, born in September 1887, became the first aerobatic flyer and was called “the greatest aviator of them all,” by Wilbur Wright.

At age 18 he was flying dirigibles in expositions and he soon began racing them. In 1910 Beachey learned to fly airplanes and joined Glenn Curtiss’ group of demonstration pilots.

He pushed the envelope as a matter of routine, flying over Niagara Falls and under the International Bridge for $5,000 cash. Still flying the Curtiss Model D, a couple months later he climbed to a record 11,642 feet by climbing until his fuel ran out, then coasting down to a dead­stick landing.

Beachey used to travel throughout the country doing loops in the same airplane that hangs in the Hiller Aviation Museum and was “probably the most famous person in the country in 1914 and 1915. It was said something along the lines of 20 percent of the population had seen him fly,” said Willie Turner of the museum.

The Little Looper was for all intents and purposes the first aerobatic flying machine and Lincoln Beachey the father of aerobatics,” said Frank Marrero, Beachey’s biographer and author of “Lincoln Beachey: The Man Who Owned the Sky.”

One of Beachey’s chief limitations was mechanical — engines weren’t designed to stay running when upside-down. Beachey had to do an outside turn until he was upside down, coast through his maneuver, then start the motor when he was right side up again, Marrero said.

“He had been looking for a motor that would fly upside down and had been working with Cur­tiss to build a plane that would fly in any position, but Curtiss couldn’t figure out fluid management,” said Marrero.

In March 1914, Beachey saw a new motor, a rotary motor called the Gnome Monosoupape (single­valve) in Santa Barbara. The rotary motors stayed on long enough while upside-down to satisfy Beachey. He canceled a trip to Australia and Japan that would have netted him $150,000 for two shows, and instead went to France to buy two motors for his plane, just months before World War I broke out, said Marrero. By May 12, 1914 he was flying the Little Looper with the new motors.

Complete with a 145-pound Beachey and 40 minutes of fuel and lubricating castor oil, the Little Looper weighed 773 pounds. Engine weight was 205 pounds, and the Little Looper had a climb rate of 1,125 feet per minute and a top (level flight) speed of about 85 mph, wingspan was 21 feet. The landing gear was of a rigid design and of the tricycle type.

The controls were standard Curtiss (albeit beefed up for aerobatic stresses), a shoulder yoke for aileron control and a center wheel for elevator and rudder. The propeller was a Flottorp with a diameter of

Beachey was a passionate flyer and articulate in his criticism of armchair flyers. He regarded his craft as a science. Marrero’s biography provides wonderful insight to his personality:

“I am not a reckless aviator,” said Beachey to a reporter on May 12, 1914, as he made an air test and announced that he was ready to start. “I don’t take a single chance when I am up in the air. That’s why I am still here, while the other good boys are gone.

“I wish I could get a few of those scientific fellows aloft in my machine. They try to make me out to be a foolish adventurer of the sky when they do not even know what they are talking about. Theory is one thing and practice is another. The fastest speed credited to a human in a mechanical vehicle is chalked up to Burnham, the automobilist. He is supposed to have covered a mile at the rate of 142 miles an hour. He performed the feat only once.

“I have made more than 100 drops from the sky at the rate of 180-210 miles an hour. My machine weighs about 800 pounds and when it is in vertical position there is but a slight surface resistance. Imagine such a load dropping from a mile high, straight down. The speed is far greater than anyone can possibly imagine, for no human save myself has ever traveled that fast. I have no protection from the wind and until I schooled myself through long practice to take two short breaths during the trip, I was unable to breathe at all.

“It requires just 18 seconds to make the drop and so terrific is the pressure on my chest that I am compelled to wear a fiber protector to prevent the breath from being knocked out of me. It required three months’ time for me to master this drop. I sent the biplane down at a slightly steeper angle each time until at last I was dropping straight down.”

Marrero became fascinated by Beachey as a child. An aviation history buff, he kept running across three-line references to Beachey as the greatest aviator of them all, but no more. Marrero found Beachey didn’t drink or smoke and was successful financially, making more than the annual average wage every day by taking a percentage of the gate receipts.

“He made a minimum of $1,500 daily, the national average being $1,200 (per year). In Dayton he cleared eight grand one day.” said Marrero. Only problem, he spent all his money on girls. One of the reasons Beachey didn’t stay popular was due to his womanizing.

“He had a girlfriend in every American city. He literally bought diamond engagement rings by the dozen and always kept one in his vest pocket.” And he was a good-looking guy, Marrero said.

“When his wife divorced him at the end of 1913. She listed 32 cities Beachey had current girlfriends in before the judge stopped her and granted the divorce,” Marrero added.

Less than two years later Beachey went to that great hangar in the sky. He died in full view of the world on Beachey Day at the Panama-Pacific Exposition in 1915, held in San Francisco. He was not flying Little Looper at the exposition, but a monoplane he had been flying earlier in the day.

“The gold medal they were going to present to him was not ready yet, so they asked him to go up one more time. That was it. He drowned in front of a quarter of a million people.

“His wing broke at the bottom of a dive and he hit the water at about 180 miles per hour, at the bottom of a full power dive, and survived the crash. They saw him struggling to get free. Autopsy showed he had a broken leg,” said Marrero.

Beachey died at the peak of his fame, in full view of his public with a reviewing stand full of dignitaries waiting with a medal.

Frank Marrero’s book, “Lincoln Beachey: The Man Who Owned the Sky,” and Hiller Aviation Museum newsletter articles were used in the preparation of this story.