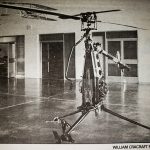 In 1940 Igor Sikorsky built the first helicopter on the East Coast. In 1942, Stan Hiller, a 19-year-old, figured building helicopters on the West Coast might make a good business. He gathered a team to help him, including Harold Sigler, a naval architect, Jack Galliano and his son Jack Jr. and Burt Cann, a welder.

There were very few books with any practical information and Hiller didn’t know how to fly a helicopter, anyway. The team virtually started from scratch. In 18 short months, the group put together the XH-44, a craft with the unusual configuration of two counter-rotating blades.

“It’s interesting he started out with a counter-rotating setup, because that’s much more complex than a regular helicopter,” said Willie Turner of the Hiller Aviation Museum.

The spring of 1944 found Hiller in Cal Stadium in Berkeley, his aircraft tethered to the ground to avoid catastrophe.

“It’s never been tested, never been proven and he’s not a helicopter pilot. He had to survive that, and he did, though he ended up on his side a number of times,” said Turner.

Hiller learned to maneuver the craft through trial and error, and by summer of that year the XH-44 was ready for its official debut. On August 30, 1944, the craft mesmerized spectators as it rose vertically, flew sideways, backwards and hung stationary in the air.

Hiller went on to a distinguished career in aircraft design and production. “He became a very proficient helicopter pilot and made the first roof-top landing on the West Coast. He put pontoons on it and landed it in swimming pools and in the bay,” said Turner.

Hiller donated the XH-44 to the Smithsonian Institution in the 1950s, but the institution has loaned the fledgling rotor craft to Hiller Aviation Museum for display. One of Hiller’s subsequent projects was the government­funded Hiller Flying Platform. The Platform “was the world’s very first vertical takeoff and landing aircraft of any kind. I say aircraft because it’s not a hovercraft (too high from the ground) and it’s not a rotocraft, not a helicopter because the blades aren’t what’s keeping it up. This is a winged ring – a flying, winged ring,” said Turner.

The mechanism looks a bit like the opening of a modern jet engine turned upwards to face the sky. The blades inside the frame are shaped just like air­plane wings, so when the ring be­gins to turn, they generate lift as well as pushing air out like a fan.

The wing configuration creates 40 percent of the lift and the inducted fan pushing air down creates the other 60 percent.

Control was simple. “It was kinesthetically controlled, whichever direction you leaned was the direction you would go. You could fly as high as you wanted to fall, as they say,” said Turner. There was a single gauge for rpms.

The platform worked, but the design never went into production. “People always ask, ‘Why don’t you see a bunch of Hiller Flying Platforms out there, why didn’t it work?’ The answer is it goes back to the original reason he started building helicopters. It was business. It wasn’t like he had set out to build a flying platform. “As an inventor, the government would come to them and say build a vertical takeoff and landing aircraft and here’s the money to do it.”

The military paid for the prototype and when the funding ran out, Hiller moved on to other projects. “Simple economics – that’s why a lot of these interesting designs never got past the testing phase,” said Turner.

Vertical takeoff and landing craft, called VTOL, continued to progress. The next step was a machine similar to the Flying Platform, but with a number of refinements. Instead of being exposed to the elements, a one-man tower with a Plexiglas bubble at the top was added for the pilot to stand in.

Exterior machinery was covered with material, making the Coleopter look even more like an upended jet engine. In this advanced form, the Coleopter, whose name is derived from the Greek word koleopteros, or “sheathed wing,” would not only take off and land vertically, but could make the transition from vertical to horizontal flight without changing the mode of flight control.

Ken Spence, the craftsman who recreated Frederick Marriott’s pioneering Avitor Hermes. Jr., breathed life back into the full-sized version of the Coleopter at his workshop in Bend, Ore. Now one of the most eye-catching displays in Hiller Aviation Museum, the Coleopter looks ready to fire up and fly.

VTOL craft continued to advance technically while pilots increased their skills and experience was codified and converted to training. In the 1950s the skills turned into an art form. An article by Frank Kuznik in the fall issue of Air & Space Magazine details the inception, refinement and expansion of a team of “dancing helicopters.”

Left to its own aeronautic devices after the Air Force was formed in 1947, the Army wanted to develop what was left. A training division at Fort Sill, Ok­lahoma, was allowed to chart its own course in developing the dance. Soon five Bell H-13E Sioux ‘copters were, rising, turning, dipping and settling in a minuet du monde, the face of the earth their dance floor.

Today VTOL craft are incredible machines made to pluck the injured from isolated spots and to bring death and destruction from a flying platform.

The V-22 Osprey is a tiltrotor vertical/short takeoff and landing (VSTOL), multi-mission aircraft and will replace current Marine Corps assault helicopters in the medium lift category. The Air Force will use the Osprey to pluck bodies from clearings, roof­tops and crash sites and supplement Special Operations Forces aircraft.

This is a tiltrotor machine that combines vertical flight capabilities of a helicopter with the speed and range of a turboprop airplane. The craft can be fueled in the air and is capable of what military documents call “world­wide self-deployment.”

The Osprey is powered by two 6,150 shaft-horsepower turbo­shaft engines, each with a 38-foot diameter, 3-bladed proprotor. The engines are connected to each other by interconnect shafting which maintains rotor synchronization and provides single-engine power to both rotors in the event of an engine failure.

Battle damage tolerance is built into the aircraft via the air­frame, made primarily of graphite-reinforced epoxy composite which provides improved strength-to-weight ratio, corrosion resistance, and damage tolerance, compared to typical metal construction.

VTOL have certainly come a long way from the spare racks with long blades that first rose in the air 50-odd years ago.