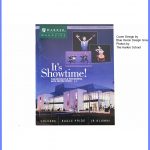 This article originally appeared in the summer 2018 issue of Harker Magazine and was reprinted in Harker News Online.

Note from the Head of School:

Harker thanks all those who contributed to the amazing effort it took to bring both the Rothschild Performing Arts Center, with its Patil Theater, and the athletic center, with its Zhang Gymnasium, to fruition. Community members chipped in with donations large and small, attended events to celebrate milestones in the construction and joined us for our opening ceremonies in August and February. These facilities will serve many future generations of Harker students and we honor you, our community members, for making it all possible.

The Rothschild Performing Arts Center has been in constant use since opening on Feb. 2, and students are reveling in the change to their experiences as performers. Classrooms and rehearsal spaces were in immediate use and a number of academic performances, as well as five big public performances, have been held.

The first big show at the Rothschild Performing Arts Center (RPAC) was United Voices, a night of vocal performances from all of Harker’s lower, middle and upper school choirs. Students were impressed with the advantages of the new space.

“Most obvious to me were the superior acoustics in each classroom,” said Millie Lin, grade 12, who sang with Cantilena, the upper school women’s chorus. “We could now practice in a space that fits the size of our sound, and shape the quality of it. I could enjoy our music making so much more! The acoustic quality is so incredible that our performances feel more intimate, making the connection between choir and song more comfortable and beautiful.”

Akhil Arun, grade 12, sang with Downbeat, one of the upper school choirs. “The most exciting part of performing in the new center is just the feeling of having a performing space that we can call our own. It always felt like intruding when we would perform in other spaces, but now it really does feel like we belong here.

“Having this building on campus will massively help performers as it now expands what we can do. In many of my performing classes I am taking at school, we are now able to just walk over and try a monologue or a scene on stage, something that none of us could even dream about a couple years ago. I think the RPAC is just the perfect space to house the performing arts at Harker as it offers state-of-the-art technology in all aspects of the performing arts,” he finished.

Fellow Downbeat singer Rahul Bhethanabotla, grade 12, noted, “Having the building to practice and perform in is a massive game-changer. There are multiple practice rooms so vocal groups, instrumentalists or anyone really can practice in an ideal environment for music.”

“The theater looked very professional [and] it boosted my confidence.” Shchegrov noted that technical advantages were immediately apparent. “In comparison to other theaters, I could hear the rhythm section and saxophones much better. Usually, it’s hard for the trumpets to hear [the rhythm and saxophones], because we are behind them. It helped my section; I knew exactly what the tempo  was and which part of the chart we were on.”

Satchi Thockchom, grade 12, who plays drums for The Harker School Jazz Band, noted the sweet advantages of being on campus for the rehearsals and show. “The [acoustic] shell brought out a lot more of the subtle sounds, so I think the audience could hear the intricacies of the pieces. I could actually hear the whole band and that helped me approach the songs more musically.”

Nothing pushes the boundaries of live performances like a musical, and this year’s musical within a musical, “42nd Street,” gave the stage crew a chance to stretch its wings (pun intended!).

“42nd Street” technician Logan Frank, grade 11, has been crewing for Harker shows for two years. “For me,” Frank said, “the most significant difference has to be the multiple possibilities of the new theater. At the old Blackford Theater, we were limited by the changes we could make onstage, and the number of props, sets and backdrops we could use. Now, with all the new equipment in the Patil Theater, my job gets much more complicated, but also more exciting. I get to use items like the pin rail, catwalks, scene shop and more, which allows me to train and learn how to use all of these tools in the future.”

The more complex technical options allow for greater flexibility. “Thanks to the catwalks, we can change light equipment easier and faster than before, which gives us more time for rehearsals,” Frank noted. “Finally, the amount of space backstage allows us to be able to set up significant structures on stage, which gives our performances a whole new aspect.”

One of the finest experiences has been that of the musical performers as they finally have the full access and range of equipment that they need to do the best possible job. Sameep Mangat, grade 12, has been in musicals throughout high school and directed her own Student Directed Showcase this year. For her, the best thing about the new facility is, “The aura and the feeling,” she said.

“The facilities, of course, are amazing. Having actual quick change stations on both sides of the stage, having a prop table not on [just] one side of the stage, and being able to actually stand backstage and not share the space with a couch – that of course has all been incredible from an actress’s point of view. “From an audience’s point of view, it’s the fly space and the beautiful backdrops and the set pieces that can all be stored backstage that create the beauty of an actual, professional show. However, for me … in the RPAC, it’s a whole new aura of sophistication and artistry that made me feel truly like an actor, not just a high school drama kid.”

Members of one of the biggest groups to use the theater, The Harker School Orchestra, slid right into their chairs for their first performance in the RPAC. “It’s amazing to have such a nice and accessible venue on campus,” said concertmaster Constance Horng, grade 11, noting rehearsals in the Patil Theater help the group get a feel for the acoustics and space they will be using in the actual performance.

“Before the RPAC opened, we would only get one rehearsal at our off-campus venue on the day of the concert,” Horng said, “so it’s definitely been more convenient to have the Patil Theater so close. I love how everyone, no matter what aspect of the program they’re involved in, is able to come together and collaboratively enjoy the innovative technology and beautiful aesthetics of the theater while pursuing something that they are passionate about.”

“Just Dance” was the final public show in the RPAC this school year, and dancers loved being “home,” too. Charlotte (Charley) Huang, grade 12, is captain of Varsity Dance Troupe and has been dancing at Harker since grade 7. “The RPAC feels more like home while the other venues, like Foothill College’s theater, although beautiful, feel like just a place to perform,” she said.

“My favorite thing about performing in the Patil Theater is that whenever I come out after a performance, I know my friends are waiting for me. Now that the shows are at school, the performances are easy to access and attend and it makes it easier for all my friends to come watch. The RPAC is honestly such a special building for a high school to have and it makes me feel lucky to go to a school with such amazing opportunities for the performing arts that you don’t see at other schools,” she added.

Eloquence aside, students feel the advantages of the RPAC in their creative hearts. Eighth grader Shchegrov summed up the whole reasoning behind the RPAC: “It made me want to play better because a great hall should be filled with great music.”