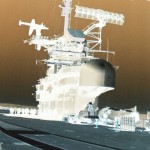 Visiting the Hornet Aircraft Carrier on a Sunday Afternoon 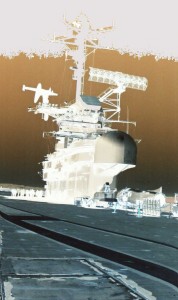 Shot from the forward flight deck

A most interesting day was had by former roomates Bill Cracraft and Jay Richardson when they took their German wives on a tour of the Aircraft Carrier Hornet, now a museum moored at the old Alameda Naval Base. Richardson and Cracraft, avid military historians, were quietly ecstatic about the one-day license to lecture granted them by their spouses. The group spent nearly three hours aboard the vessel, an Essex-class carrier built at the height of World War II at Newport News, Va.

This Hornet (differentiated from its predecessors of the same name by its hull number, CV-12), fought in numerous encounters in the Pacific Theatre and was under attack 59 times in the twenty months following her launching in November, 1943. Following World War II, the ship saw service in the Korean colflict and had one of her brightest days in the sun while recovering the Apollo 11 and 12 space capsules in 1969 and 1971(?).

The beauty of the tour is that it is unstructured. Once past the ticket collector, visitors are free to roam at will, and to join small groups for guided tours of special areas, such as the Combat Information Center (CIC) and Engine Room.

The Richardson-Cracraft party started below deck with the Chief Petty Officers’ quarters and moved forward. The ladies seemed especially interested in finding the officers’ quarters, located forward. Along the way, the group saw the galley where food was prepared for CPOs, sleeping quarters for Ensigns, the lowest officer rank in the Navy (CPOs are not officers in the strict sense of the word, but have wide powers as liason between officers and enlisted personnel). Alexandra Cracraft, herself a six-footer, took especial note of the cramped sleeping arrangments. 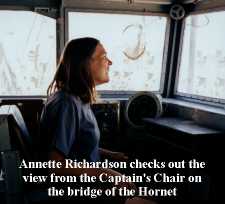 From the lowest seaman to CPO, enlisted personnel slept on cots consisting of a tubular rectangular frame hung from a bulkhead or staunchion. The the frame had a wire bed, surmounted by a reasonably comfortable-looking tick mattress, sheets and a few blankets.

All officers, from the youngest ensign to which ever admiral was on board that evening, had a regular seabed built over drawers, stacked two or three high for most officers. In every case the bed was no more than six feet long, which, as anyone approaching that length knows, is barely comfortable. Enlisted personnel had the worst of it, naturally, dealing with a total lack of privacy as well as the discomfort of having one’s ankles resting on a steel bar all night, or folding one’s self carefully into bed to avoid some other portion of anatomy knocking against the frame elsewhere.

One of the most interesting portions of the tour was the Ready Room area. Ready Rooms are miniture lecture halls where pilots reported for mission briefings. 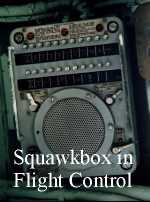 As the briefings included weather, navigation, strategic, tactical and practical information, pilots often spent a lot of time in them. The worn, comfortable leather chairs are icons of luxury for the men who in a few minutes, in ones and twos would climb into cockpits stuffed with wiggling instrument needles, bolted to the most powerful, compact engines man could devise, bristling with high explosives and surrounded by high-octane aviation fuel, and pitch themselves off a tilted deck to fight the enemy.

As throughout the ship, many of the fixtures in the medical services area were in evidence, including x-ray display fixtures and operating tables. As visitors ciruclate freely through open compartments, the tour gave a real sense of the duty and dimension involved in working aboard a self-contained apparatus. Although there were no officer’s cabins on display, along the starbord passage there were a few portholes open to darkend cabins which allowed a dim view of the compartments where two or three weary fliers could sack out after spending hours in the air in armed conflict.

Eventually, the group made its way to the fo’c’sle, where the 15-ton anchors were stored. Each link of the anchor chain is about 20 inches long and weighs 120 lbs. One remarkable piece of equipment in the fo’c’sle appeared to be a gun in the sense that it was shaped like one and had a long hollow tube. Best guess was a gunpowder-driven rope hurler, but there was no apparent way to aim it, nor was there an obvious opening for the projectile to leave the ship.

Our next stop was the carrier’s command center, the visible superstructure, called the “island” because it juts out of the deck. In the island are located the three main comand centers for the ship: the bridge, where the captain and top officers make overall decisions, the Combat Information Center (CIC), where combat inforamtion flowing in and out directs the ship’s fighting units and Flight Control, a mini-airport tower from whence landing and launching are directed. The first stop was the bridge, which came complete with raised chair for the captain, a bank of telephone switches and a radar repeater that could monitor each of the main radar screens one at a time. This very bridge was used for many a Hollywod scene, including the bridge scenes in the movie Midway.

Working towards the top of the Island The final stop of the visiting foursome was the flight control tower at the top of the island. The tower had the slanted-down windows airport towers have and a lot was crammed into a little space. More phone banks connected flight control to various parts of the ship, an acetate overlay to track coming and goings swung from the bulkhead, and there were banks of light switches and radios for communicating with pilots.

By the time the four tourists-for-a-day departed the Hornet they had climed dozens of the steep metal staircases called “ladders,” read scores of brass plates on machines, above doors and on banks of water-flow petcocks, of thich there were an abundance. They had circled the half-dozen aircraft in various states of repair, from cherried out to guts-hanging-out, located on the hanger deck.

The final stop was on the fantail, an open deck on the first flight deck level. Sheltered by the flight deck overhang, it made a perfect spot to reflect on the giant machines built for war and slug down a soda.