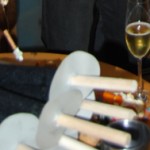 2011: Fire Ushers in A Pagan New Years In Germany

It was my second New Year’s Eve in Germany, ten years later, and this time things got dangerous. The first clue was the clutch of 6 black torches lying on the kitchen island when I came in, the second was the 3-foot long bottle rockets that are legal in Germany on New Year’s Eve, only. The molten metal wasn’t in sight. 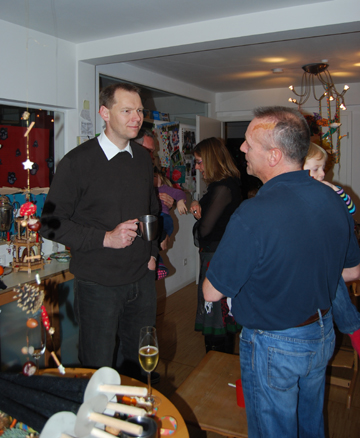 Lutz and I talking--the important thing is the cluster of torches in the lower left corner. This were of the pitch variety-burning, presumably, sticky tar-and when carried by a 5-year-old, well, scary.

Our first New Year’s Eve was in Berlin, ringing in 2002 in a jam packed crowd at the Brandenburg Gate.  In 2010-11, it was still cold and though there were no guns this time , the danger was much scarier because we all had kids, now, but still fun and cool. 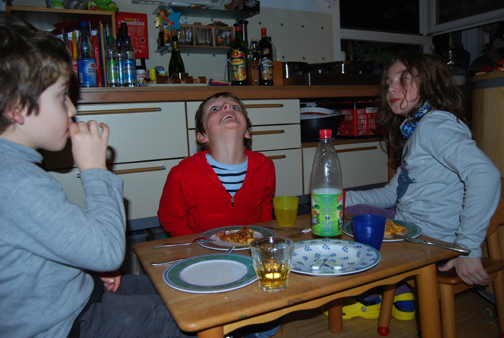 John, showing his nostrils, Oskar on the left, his sister Karoline on the right, a fearless girl.

During my first visit to Germany to woo my babe I stayed at her best friend’s house. Bettina and Aksl were already together, way back then in—1998 – and started having kids a few years before Alexandra and I did, halting at three, Mimi, 9; Oskar, 8; and Karoline, 2. We always visit with these guys when we were in town, this year we were in town on New Year’s Eve—Silvestri. Other partiers that night were Lutz and his wife Alexandra. I had last seen them in Sienna when they were camping, my wife and I were freshly affianced and rounding our out Tuscan adventure.  They have a boy, Paul, just our John’s age, 5,bring the kid tally to six, Mimi, 9; Oskar, 8; John and Paul, 6; Nina and Karoline, 2. 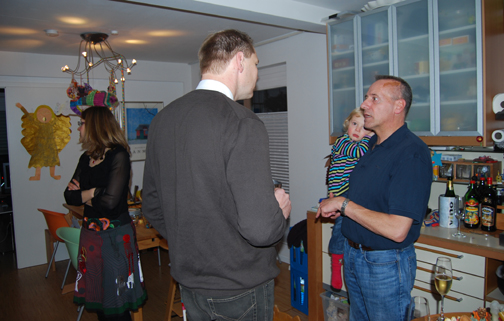 Me, making some point to Lutz. Nina getting tired-- darn kids dragging the party down. Why can't she be more like her brother who was upstairs eatiing chips off the floor where they had spilled.

Early in the evening, the kids were off on their own adventures playing and fighting, and I was in the kitchen with five adults all of whom speak English with a cup of Gluhwein. Then, we toasted the coming year with Prosecco, a dry, bubbly wine that lifted right off the palette. With three moms in the house, the kitchen was a-cooking. There were three pots on the stove, two of the famous German Christmas beverage, Gluhwein, one non-alcoholic for the kids, and the other was my wife’s squash curry soup. Bettina had a lasagna in the oven she was protecting from Aksl’s attempts to improve and at one end a strong table laden with cheeses, wurst, bread, wine and chocolate. As so often happens, the men were gently excluded from the cooking and ended up at the table, Aksl and I pandering to our little daughters’ wishes as they found us in the course of business.  Pink Floyd was on the stereo and the gals all came by to sit and chat while things finished cooking.

After the first drink or so in this civilized setting, to my surprise everyone started getting on outdoor gear. I let them go until I heard they were lighting fireworks. By the time I got out to the street, which was about 8 inches deep in churned up snow, Aksl had shot off the first salvos and now Mimi and Oscar each lit two which was pretty scary, but when there were a couple of bad misfires I got watchful. I’m just going to come right out and say it, Czech fireworks suck. I’ve been shooting off fireworks my whole life in a small way, and when three out of five liftoffs go south, well, that speaks to shoddy manufacture.  One of the kids lit something that popped up, threw a half dozen fistfuls of fire off, two or three of which dropped at our feet and went out. Unpleasant.

Aksl lit off a bottle rocket, it shot about 20 feet up and blew into three sections, one of which landed one foot from my son.  He just stared, of course, never having been badly burned, he has no fear of fire except as instructed. It goes out in the snow at his feet. I move up a bit and prepare to flip his hood up or pull him back; I kinda wanted to go in.  Then Aksl lit off a great pin wheel, it shot straight up spinning along perfectly. Next, another bottle rocket misfire. The main charge detonated prematurely and threw a head-sized fireball into a neighbor’s garden and another into the road. There were three feet of snow on the ground so both went right out.  When that was over (it was 20 degrees Fahrenheit), we went back in.  No one had been hurt.

We all shed boots, jackets and gloves and go for our chairs. We ignore the ruckus at the kids table; plates are emptied and refilled. The kids rush off, we all tuck in to a homemade tiramisu and refills from the adult Gluhwein pot. Just when I’m feeling comfortable, everyone is suiting up again. Now, I spent the first 20 years of my life in Minnesota and freezing weather has few charms for me, but Aksl picked up the torches and John was out there, so I laced up my new Doc Martin’s, twisted my bandana back around and pulled my watch cap over my ears. Alexandra begged off, as Nina was getting tired but everyone else came along.

By the time I’m outside, Aksl is handing the 18-inch torches to the kids. John has one. Mimi, Oscar and Paul have them. I’m looking at the other faces to see if anyone else thinks this is a bad idea, but it seems to be a normal sight. I take my torch and light it off the boy’s. It was an elemental night, fire and ice, a dark wooded path a trickling fountain and adults and children singing (bloodthirsty?, Christmas? Pagan?) songs deep in a woods lit red by the torchlight. Freaky. 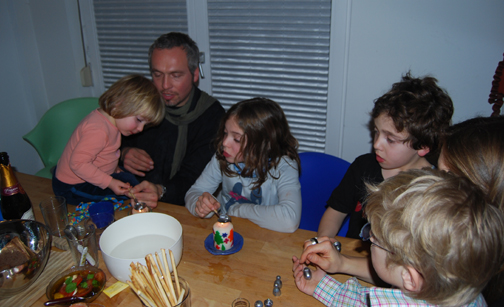 Just when I thought it was safe, more fire. Melting tin at the dining room table, and not just a little, but a big freakin' hunk. Aksl, the guy on the left, was the leader in all of the infernal activities. I just tried to stay liquored up so as to not be over-protective.

Aksl loads Karoline into a sled with handles sticking up, like a dog sled, except the driver is the pusher. Maybe it works with a dog, too, but Aksl pushed. We head down the road. Mimi and Oskar are holding the torches away from their bodies, John and Paul, both 5, not so much.  They didn’t really get that hair would catch fire in an instant, so I was on the hop keeping one from running up too close to the other. We left the road and started through a fairly dense wood at least a couple hundred yards wide. Lutz told me later Aksl said it was owned by a retired appliance magnate.  We were on a well travelled path, that went along, then up, then down, every step all I can picture is the boy slipping and falling on the torch and wondering if it will stick to him and continue to burn, or has it been engineered to go out, somehow? 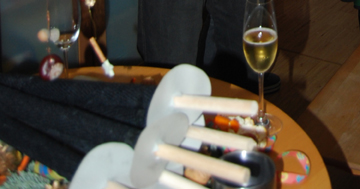 We end up at a fountain– the kind that wells up from the ground– surrounded by an ancient-appearing stone basin. The water itself was trickling from an incongruous 4-inch PVC pipe, but Mimi and Oscar knelt in the basin for a drink. John went after, but later said he didn’t drink it—I think it was hard for him to get close to the trickle in his winter clothes. Anyway, I have no idea if we dodged a bullet on that one—Aksl said it was pure—but was glad to hear he didn’t drink it.  Our little group of five adults and four kids continued on the path until we came to a wide spot where we all gathered in a circle and sang songs, one of which was “Oh Tannenbaum,” which I learned as “Oh Christmas” Tree as a lad. This is where I mentally stitched all the pieces together, from the pop of fireworks, the trek in the dark woods lit only by raw fire, the drink from a free-running fountain and finally the glow of these very German faces  all torchlit, singing songs they all knew—that I knew. Frickin’ freaky, but one of the most memorable New Year’s I’ve had: elemental, pagan, as it should be, I felt lucky to be there and was immensely happy the children were there. We turned, again, to the snowy path.

Paul had given up his torch. John was slipping a bit, showing fatigue, and readily gave up his torch. With the five-year-olds disarmed, the chances of someone going to the hospital were back in the basement where they belonged.

We pushed back to the house and stomped our boots once more on the doorstep. Once back around the table, a bottle of scotch—a clear, golden liquid and I never caught the name—came out and the glow of the first sip chased away the remnants of the fire hazard. But I couldn’t quite relax, as another tradition was being carried out involving fire and molten metal.  In this tradition, the celebrant holds a spoon with a wooden handle over a candle. The spoon is a crucible and it holds a hunk of tin the size of a robin’s egg.

The deal is, you melt your tin—which used to be lead, but for obvious reasons has been replaced with a less poisonous metal—and fling it into a bowl of water. The molten metal freezes into some shape and the shape is used to forecast your fortunes for the coming year according to a chart that comes with the tin and crucibles. Again, I’ve been burned by small drops of solder, maybe as big as a push-pin head and it hurt like the dickens. These youngsters were melting a tablespoon of melted lead. At this point, Nina saved us and I had a ready excuse to drag the boy away from the table to head home. He’ll be back in a few years and can try it when his motor skills are ramped up.